If you had previous versions of the Canon extenders, you were able to stack them together and get extra magnification. In many cases, the extra hit to the aperture made this pretty useless and some people don't even care to use them at all. But as camera sensors have improved dramatically, it's becoming more effective to use them individually and even together.

With the latest extenders, the Series III, you can no longer physically attach them together because they protrude slightly into the rear of the primary lens. And because the extenders have a lens element that is flush with the rear of the extenders, you cannot mate them together. Fortunately, Canon saw fit to put a protective rubber ring on that protruding element so you will not damage your optics if you try to mate them together or with a lens that is not designed to take an extender.

For those of us who crave focal lengths longer than 1000mm and who have the gear and the experience to get decent images at the extra long focal lengths, there is a solution, and it's got a spin off as well. By using a simple 12mm extension tube in between the extenders, you can provide the space necessary to mate them. 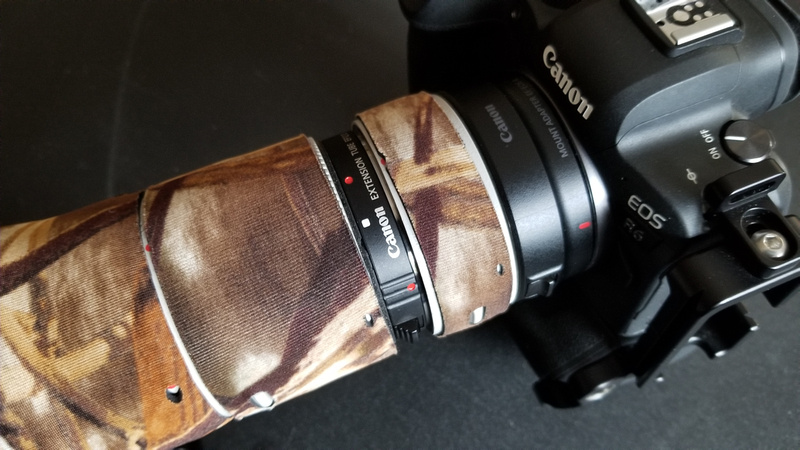 I started off using an off-brand extender and although it worked, the connection was a little sloppy. For about four times the price, you can get a genuine Canon one. For the extra money you get a nice little drawstring bag and both a body and rear lens cap. You also get a better fit.

In the photo above, you can see my 500mm/f4 lens with a Series III 2X Extender, followed by the Canon 12mm extension tube, and a Series III 1.4X extender. That's a lot of connections but it is surprisingly tight.

So, how well does it perform? Like it was made to work that way! And here is one of my first examples using it in this configuration. A handheld shot of a pair of eagles at 1400mm (1412mm technically). Shutter speed was 1/1600 and ISO was 3200 at f11 on a Canon R6. I cropped this vertically from a horizontal shot so it's only cropped slightly on the left and right sides. 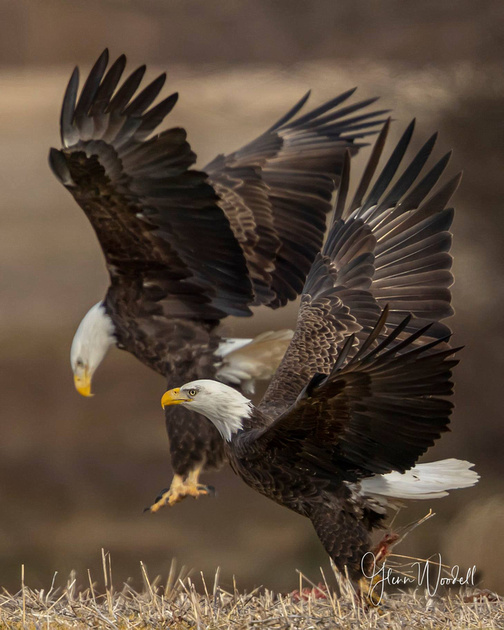 And what's the tradeoff - because there is always a tradeoff. Well, you lose your ability to focus at infinity. But unless I'm shooting the moon or the sun, my new infinity is so much farther away than I would normally shoot, that it's effectively unchanged. I am still able to focus at an object five miles away!

And the spinoff I mentioned is that I can leave the extension tube on even when not stacking extenders and it reduces my minimum focusing distance. It's not huge but it reduces it from 11 feet to about 9-1/2 feet. This difference can determine whether or not I grab the shot of that bird that just landed nearby.

If you have a good prime lens, consider getting an extender and even two so you can stack them.